Check out the article, Where There's a Will, There's a Weight, in today's copy of "Faith and Fitness Magazine."

This wonderful magazine is a wealth of helps to grow spiritually, physically, and mentally. After all, God made us in His image, three separate parts similar to the trinity, God, the Father, God, the son, God, the Holy Spirit.

Let me know if you have questions. I love to help others struggling with weight.

Posted by Unknown at 4:34 PM No comments:

I took Terri Main's advice and set up my first global link to Amazon. So far, I've only set up one for my devotion book, Divine Dining: 365 Devotions to Guide You to Healthier Weight and Abundant Wellness. When you click on this link, it takes you to the Amazon page that sells that book, but it's the store that's near to you, in your language. 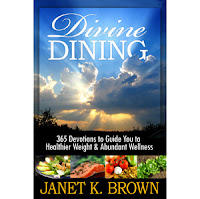 
If you live in another country, and find this book in your most-used Amazon store, please, comment, Facebook message, or e-mail me. I would love to know if it works.

Thank you, my friends. God bless.

Posted by Unknown at 9:46 AM No comments:

Be True To Yourself

During spring break, we enjoyed time with our two grandsons. The oldest is a senior in high school and plans on beginning college in the fall. We pray for the many decisions he will need to make in the next few years. 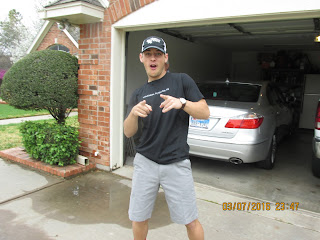 My husband told our grandson. “When you go off to college, be true to yourself.”


In the early church, they struggled with feeling some were more important than others. We know this to be true because of what Paul wrote to his mentees.

Young people must find their part in the . When they launch out into this world for their first attempt to face adulthood, everything will be challenged. Our churches help us on Sunday, but most of us deal with non-Christians on our job, at our school, and in our neighborhoods.


My grandson isn't the only one who might need this reminder. At times, I need to be told, "be true to yourself." Perhaps, you do, also. We shouldn’t try to be something we’re not. God created us special. He planned our lives while we grew in our mother’s wombs.


I recently read a story about being the person God created us to be. I wanted to share it.


Traveling together, a horse with a shiny coat and a fancy saddle trotted beside a mule with a heavy load and a matted coat.

“Oh, how I wish I could be as beautiful and graceful as you,” the mule told the horse. “I wish, too, that I was unburdened and carefree.”


A few days later, a great war broke out, and the horse went to battle, while the mule carried supplies. During a skirmish, the horse was wounded and lay dying. The mule plodded to the front carrying guns and medicine. His burden helped save the horse’s life. It was then that the mule realized that in being himself, he fulfilled his purpose and kept them both safe.

I minister to many who deal with low self esteem, often resulting in weight gain. I hope this story reminds you to walk as God directs. Follow your gifts. Be secure in who you are. Give thanks to the Lord, for making you uniquely you.

Today, I appreciate who I am and what I have.

This anonymous saying helps me in my weight loss commitment to God. I pray it ministers to you, today.

to "let go" does not mean to stop caring, it means I can't do it for someone else.

to "let go" is not to cut myself off, it's the realization I can't control another.

to "let go" is not to enable, but to allow learning from natural consequences

to "let go" is to admit powerlessness, which means the outcome is not in my hands

to "let go" is not to try to change or blame another, it's to make the most of myself

to "let go" is not to care for, but to care about

to "let go" is not to fix, but to be supportive

to "let go" is not to judge, but to allow another to be a human being

to "let go" is not to be protective, it's to permit another to face reality

to "let go" is not to deny, but to accept

to "let go" is not to nag, scold or argue, but instead to search out my own shortcomings and correct them

to "let go" is not to adjust everything to my desires but to take each day as it comes, and cherish myself in it

to "let go" is not to regret the past, but to grow and live for the future

to "let go" is to fear less, and love more

Could Our Lifestyle Be Making Us Gain Weight?

Could our lifestyle be making us gain weight?

Our recent vacation with our RV got me to wondering. Most of us have the biggest problem with wanting to overeat in the evening. Why? Because we're sitting in front of the TV to rest. No activity. Nothing to stir our minds, so we turn to food. How about making an ice cream soda? Oh, that sounds good. A flash of commercial streams across the screen of Taco Tuesday. I have some tortillas and leftover chicken. I think I'll make one now. That sounds so good. How about popcorn while we're watching a movie? Perfect, isn't it?

Does that sound familiar, or am I the only one?

I'm old enough to remember the days before air conditioning. Neighbors met on front porches. Newcomers were never strangers for long. Kids played outside with not a face plastered to a phone or IPAD. Hot wind whipped around us, sending us scurrying for a cold lemonade or Coca-Cola, but it was too hot for food. We snapped beans or cut up okra from our gardens. Absorbing conversations swirled around us like the lightning bugs our children chased instead of eating cookies and cake.

Me and my friends either walked to school or rode a bus. Few parents transported their kids. Not knowing someone on your city block was rare. In the country, where my grandparents lived, they knew everyone in town.

I lived in Cockrell Hill, a small part of the Oak Cliff section in south Dallas. Red Bud Lane had its own softball team. Red Rover, Red Rover was one of favorite pastimes. We produced a circus in one of the neighbor's back yards. Everything revolved around the great outdoors.

My husband grew up on South Ervay St. just to the south of downtown Dallas. That area is now all commercial. We have a picture of his old house with a huge front porch stretching over two sides. He tells of sitting out every night visiting until the families went inside for the night. They rolled out bedding into the hallway where a breeze cooled their sweaty bodies.

In 2015, RVers resemble 1940s and 1950s neighborhoods. Everyone walks whether with their dog or their mate. Walkers stop by one trailer after another where people sit on their "front porches" waiting for neighbors to gather. The usual question is "Where are you folks from?"

During our trip to Red River, NM, we sat out every night, often with a fire. One neighbor came from Albuquerque. On the other side were new friends from Amarillo, TX. Tennis courts and a playground across the way beckoned children, who remained there until dark completely covered the park, Sometimes, they played by artificial light until ten, which starts quiet time in most RV camps. Fires lit the "porches" where adults visited.

Grills and campfires cooked dinner, but rarely did people eat after dinner. Personally, I didn't need a snack. I had titillating conversation. I had a hypnotic fire. I had people to watch, whether they were throwing a Frisbee or backing a motor home into a small slot.

RVing is a throwback to simpler times.

A lifestyle clustered around the TV with air conditioning going full blast could be one of those things that's making Americans fatter?