Introduction to Our Australian Anthology & A Giveaway

Three of my short stories appear in the recently-released Australian anthology, Let the Sea Roar. How exciting! 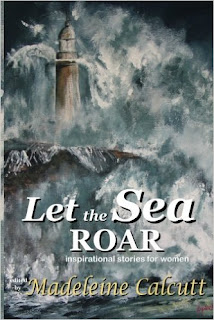 Be sure to scroll to the bottom for instructions on how to receive this book for free.

The internet is a wonderful invention. Because of one woman in Australia reading my devotion book, Divine Dining, I "met" other Australian authors that were working on an anthology of short stories dealing with heartaches faced by women worldwide. They invited me to submit stories to be considered as part of the book.

Because of the perseverance of Madeleine Calcutt, this book became a reality. I asked her to tell us how this came to be. Take it away, my dear friend, Madeleine.

﻿
Having written some short stories several years ago that were just gathering dust on the shelf, I finally decided to do something with them. I contacted authors from various writing groups such as the American Christian Fiction Writers, Christian Writers Down Under and the Society of Women Writers of Victoria. I also put an advertisement in the Baptist Witness magazine and got an excellent response from each of these. I was inspired by the writers’ enthusiasm to contribute their stories to my project.


As the stories came in for me to read and edit, I was incredibly moved by them and impressed by the authors’ writing skills. They shared my vision, and we looked forward to the day when our anthology would be released, which was December 12th 2015. The book has emerged as a sensitively balanced mix of stories, some light hearted, some quite intense, full of pain followed by peace and joy. Make sure you have those tissues ready!


With twenty-eight short stories by nine authors, Let the Sea Roar explores how women cope with turning points in their lives. It is a universal theme to which women readers will relate, covering issues such as homelessness; domestic violence; teenage pregnancy; family dysfunction; alcoholism; loneliness; divorce and the shattering of hopes and dreams. Many of these stories are loosely based on the authors’ experiences or those of people they know well. This added authenticity, but at times, there were awkward moments when I believed that realism should be sacrificed for literary perfection.


With nine authors each having different viewpoints, there were some interesting confrontations. Sometimes compromise was the answer and this ended up improving the story instead of taking away from it. Six years it took, would you believe? We gave it a year to get ourselves published until one of our authors, Jenny O’Hagan, formed her own publishing company, ‘By the Light’, and published us, doing a magnificent job. It was an exciting time the day the anthology was officially released. I felt as if I were walking on air after all this time!