Today is Launch Day for Worth Forgiving

I'm so excited. Today is the day Pen-L Publishing will release Worth Forgiving.

If you pre-ordered in August, the winner for the free, signed copy was drawn this morning.


Second in the Wharton Rock Series

The state of releases from prison Katie Smith. Full of optimism, she sets out to get a job, rent her own place, and make a home for her eight-year-old daughter, but Katie gave away her daughter three years ago. She could use a friend, but her past choices threaten to doom her to continued failure. 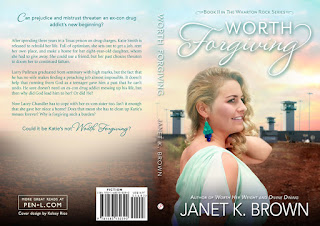 Larry Pullman graduated from seminary with high marks, but the fact that he has no wife makes finding a preaching job almost impossible. It doesn’t help that running from God as a teenager gave him a past that he can’t undo. All he needs is an ex-con, drug addict messing up his life, but then why did God lead him to her? Or did He?

Isn’t it enough that Lacey Chandler gave her sister’s daughter a home? Does that mean she has to clean up Katie’s messes forever?

Could it be that Katie is not Worth Forgiving?


Now, it can be purchased at Pen-L Publishing, on Amazon, Barnes and Noble, or ordered through any retail book store.