Biblical Fiction with Caryl McAdoo and a Giveaway

In April, I met a phenomenal Christian lady and author, Caryl McAdoo. She blessed me with her attitude and her songs. I bought one of her books and read her work for the first time. I asked her to be my guest today. Not only did she accept, but she offered to give a book away free. Scroll to the end to find out how to enter the contest.

Hello, Janet! Thank you for having me at your blog! It was a blessing to meet you face to face at the North Texas Book Festival. 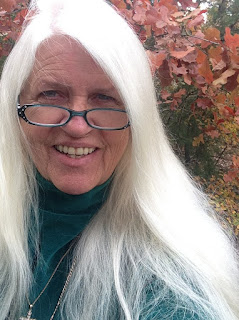 I longed to interview you so others could get to know you as I did, so here goes:


Did you ever feel like giving up on your writing?  And how did you press through this?


Oh no…l’ve had times when I couldn’t write as much as I liked. My husband and I took in four little grandsons, ages 6, 4, 3, and newborn after one year of an empty nest. The baby is twelve now, and the oldest graduated and off to college. But when we were fifty-two, corralling four little wild men turned out to be very time consuming. I pressed through living one day at a time. After we got them in school, I had more time—but it was never that I didn’t want to. I just had to put the boys first as they were obviously God’s plan for me and my dear husband.

What gave you the idea for this book?


Then the Deluge Comes is volume 2 of The Generations Biblical fiction series. I actually started it many years ago, and in a way it was taken from my very first full-length manuscript. I’d read books in that genre and really loved the way the well-known Biblical characters came to life. But I always strongly dislike it when authors or movie makers and storytellers—anyone—changes the living Word. As far as I’m concerned, it is written in stone. The Biblical part must remain it tact and not be altered one jot or tittle. The fiction is where I make them come alive and real to my readers. I do my best to put them there, in the Garden of Eden in A Little Lower Than The Angels, volume 1, and with Noah and his family in Then The Deluge Comes. Basically, to answer your question, I wanted to start at the beginning. The idea for the story was really not mine, but the Lord’s. 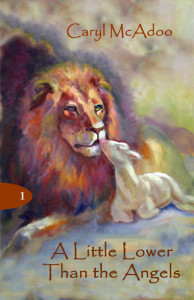 How do you feel this book will encourage readers, or did you have something in mind like this when you wrote it?


One issue that I hope to bring out is that the Bible folks weren’t saints, just people like us. I hope to offer a bit of an untraditional perspective for each one, too, then in the ‘Search the Scriptures’ section in the back of each volume, let the reader know how I came to my conclusions. I challenge them to find anything in the new telling of the age old story that does not line up with the Word. I had one reviewer say I didn’t go far enough, that I didn’t put in how all the people mocked Noah and how he preached to the hordes of lost souls. But she did not read and ‘know’ that from reading  Scripture, she got it from a movie that did not line up with the Living Word of God. That’s one reason I so dislike any media that puts out Biblical fiction but strays from the Bible telling of God’s story!

How did you find your publisher?


I am blessed to say that I am my publisher. After Simon and Schuster released the first in my historical series, Vow Unbroken, and in taking eighteen months added to another six after its release (two years)—during which time I could not contractually sell another title—I was blessed to publish Indie (or independently). God provided the exquisite cover-art through an artist I met online, Judy Downs Levine in Arizona. She’s creating original paintings for each cover in the series. In this way, I have complete control over the title to have sales or give the books away as I wish (offer them free for a special time). I’ve donated many copies to church libraries all over the country. I love being a hybrid—traditionally and Indie published—author. 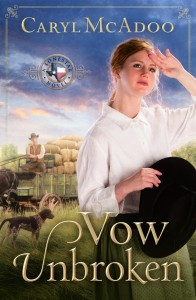 If you were a song, what would it be?


Oh, Janet, what a wonderful question! No one has ever asked me this. My name Caryl means ‘joyful song,’ and I adore music. Maybe more than any other creation God made for us to enjoy. I love that it carries me to His presence. What song would I be…? I love Michael W. Smith’s This Is the Air I Breathe with phrases like ‘I’m desperate for You’ and ‘I’m lost without You’, and Kari Jobe’s rendition of the Revelation Song takes me to His Throne Room when I sing with all creation ‘Praise to the King of Kings, You are my everything.’
But the song I have to choose to be is Andrae Crouch’s To God be the Glory. It embodies what I try to make my whole life about: thanking Him for everything He’s done for me that I did not deserve, but He gave them to me only to show his love for me. As an author, I’ve adopted the life premise: Praying my story gives God glory!

As I said before, I love your attitude and your songs. What do you like to do when you’re not writing?


First, be with Ron – eating, going to movies, traveling—even to Dallas and back—conversing. Past God, Ron McAdoo has been my everything for forty nine years, and God’s seen us as one forty-seven this month! On the twenty-second! But I love singing new songs the Lord gives me and painting or crafting. Just have so little time these days since I’m committed—God willing—to releasing ten titles this year, maybe eleven!

Oh, wow, congratulastion ahead of time, Caryl and Ron. 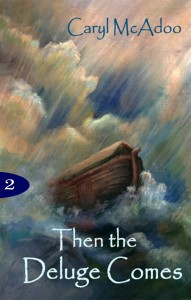 Series: The Generations series brings to life the famous men of God’s Word beginning with the first Adam an ending before the birth of the second.

Evil overtakes earth, but Noah walks in obedience and builds the ark. His story comes to life from a new perspective including glimpses into the Heavenly realm.

This is my unsolicited, unbiased review of the above book. What is Biblical fiction anyway?


I love reading the Bible. It's God's guidebook--the Word from God's mouth. This book is many things; poetry, history, memoir, letters, and law, but one thing it is not is fiction.

Because its pages fill with examples of real people, we're given knowledge of how others dealt with similar problems as we do. This scroll could not hold everyone's story in detail, so we only read brief excerpts or scenes of the lives of its heroes, heroines, or villains.

Have you ever wondered about the rest of the story, the part not told? What was it like to be a brother or sister growing up with Jesus? How did Bathsheba adjust to Solomon? Did she love him, hate, or resent him? What was it like to live in the early years after the creation of man when there was no one to marry except your brother or nephew?

That's where Biblical fiction comes in play. A wonderful author, like Caryl McAdoo, reads the Bible story and thinks "what if."

I read her book Then The Deluge Comes. This story traces humankind from the sixth generation through Enoch, Methuselah, and on to the time of Noah and the flood. The book is the sequel to her first one, A Little Lower Than the Angels. Not only does, McAdoo address the idea of marrying your sister, but about what happened to Cain after he killed his brother.

The characters are true-to-life with layers, complications, likes and dislikes as we do today. They coped with the trials and dangers of that time period. They quarreled and loved and hated just like us.

The book gave me new insights into the Old Testament time of Genesis and how then, as well as now, we choose individually whether we will follow God's laws or rebel. I liked the romance between Shem, Ham, and Japheth, and the women Lamech found at God's direction. I loved seeing through Shem's wife, Jemri's eyes the building of the huge boat.

Another interesting factor about this book envisions a parallel universe between mankind and the angels in heaven.


Christian, Simon & Schuster, hybrid author Caryl McAdoo is currently writing three series, all from a perspective of faith: her historical Texas Romances; the contemporary Red River Romances; and The Generations, her Biblical fiction. The novelist loves singing new songs the Lord gives her, and she paints. In 2008, she and her high school sweetheart-husband Ron moved from the DFW area—home for fifty-five years—to the woods of Red River County. Caryl counts four children and fourteen grandsugars life’s biggest blessings believing all good things come from God. Praying each story gives God glory, she hopes it will also minister His love, mercy, and grace to its readers. Caryl and Ron live in Clarksville, the county seat, in the far northeast corner of the Lone Star State.

Where to find Caryl and her books:


Then the Deluge Comes  http://tinyurl.com/DelugeComes


(All First Chapters are offered here)


(Get FREE books for subscribing!)


Thank you so much for having me Janet, and giving me the opportunity to share THEN THE DELUGE COMES! May God bless you with all His love and favor!


And, thank you, Caryl, for being my guest. I'm honored.


Don't forget to write a comment below along with contact information for a chance to win one of Caryl's Biblical fiction books. I'll draw names on June 14. Don't delay.

Great interview! Caryl, thanks for stopping by and for your generous offer for one of your books!

God bless both of you!

Thanks for your comment, Beth. You'll be in the drawing now.

If you're having trouble leaving a message, FB message me (See right hard side of blog for FB author page) your message & I'll post it. There's an error on google. I'm trying to correct it but many seem to be blocked from leaving a comment. So sorry.

Bonnie Lanthripe FB messaged me to leave this message: I would love to win the book but can't leave a comment.

Thanks, Michelle, for the comment. I'll enter you in the contest. I appreciate your trying again after I gave wrong URL.

Thank you ladies for such an engaging interview. I hope I win the book, otherwise I will be purchasing it!
rlsprince@yahoo.com

Yeah, Rhonda, you made it. Thanks for not giving up. Sorry I steered you wrong. You're in the running.

Oh, y'all! Thank you so much for coming by, and please forgive me for now getting by to say hey, and thank you for your comments. Janet, I so appreciate you inviting me to visit your blog! I've been on a grill of late getting two books ready for release! One I'm about to pull the plug on and the other, a contemporary Christian Romance with a Texas Ranger baseball pitcher for a hero, is almost thru with proof readers' corrections! The year has been exciting with the Lord. And Rhonda, if it wouldn't offend you--I mean you are the winner, I'd like to send Michelle and Beth a gift copy, too! Would you ladies e'me your mailing addresses, or if you prefer, I can gift an eBook from Amazon with your email addresses. Let me know y'all's pleasure! :) Hugs and blessings! :)

Caryl, that's the most generous kind offer I've ever seen. Glad we got all the e-mails to you. Ladies, you're in for a treat. Me, too. She sent me "A Little Lower than the Angels." How wonderful!