My 10 Best Tips for Losing Weight

In October, many of us run a mad dash to lose weight before the holiday season. Even ones that try to maintain their weight loss are thinking of ways to keep down the pounds before holiday temptations seduce us to indulge.

Time to think of ways to help. Here's my best 10 tips:

1. First Things First
Give your body what it needs, give to God your worship and devotion.
Often we put food on the throne of our lives. No one can lose weight this way.
Through God comes power.

2.Write
Stress, loneliness, boredom, depression; these are things that drive us to overeat.
Get in the habit of writing out your problems every day. In this way, you release them to God and no longer need worry.

4. Tip the Milk
(Fat-free, of course) Have 2 servings of dairy a day. Stick with low fat yogurt, cheese, milk. Studies prove we lose better with dairy on our menu.

5. Move It, or Lose It
Activity is important. Weight loss comes from eating less calories than we use up daily. If we use more calories, guess what, we get to eat more. Leave it to a recovering compulsive overeater to utilize that. If you have leg pain, strengthen your upper body with exercise. If you're overweight and out of shape, take short, slow walks to begin. Do something if at all possible.

Extra benefits to activity are to lower blood pressure, strengthen muscles, relieve depression, increase metabolism, and get our minds off our loneliness.

6. Divine Dining
Okay, I'm prejudiced since I wrote the devotion book Divine Dining, but long before I wrote this book, I read and still read excerpts from inspirational books that keep my mind on the goal of eating unto Christ.


“For wherever I am, though far away at the ends of the earth, I will cry to you for help. When my heart is faint and overwhelmed, lead me to the mighty, towering Rock of safety.” Psalm 61:2 Life Recovery Bible
Posted by Unknown at 10:56 AM 12 comments: Links to this post

Fall fascinates me. The intrigue of trees dressed in their green summer duds changing into clothes of multi-colored glory sparks my creativity.


On Tuesday, Oct. 15, fall finally made an appearance in Texas. My hubby and I found fall first, though, when we traveled to Eureka Springs, Ark. on Oct. 10. Such beauty ...

"How far until the highway?" Charles would ask.

I would pick up the map, then lay it down again. "I can't check now, I'm looking at trees."

"Oh, and lookee, All along there, the red is brilliant."

We cruise on the Belle of the Ozarks, a 75 minute excursion along the shoreline of Beaver Lake. Our guide gives us the names of many of the trees that captivate us.
﻿﻿﻿﻿﻿﻿﻿
In early October, the black gum trees turn dark red, some almost purple. Sassafras trees don orange foliage. Hickory trees prefer yellow leaves. Sumac lines the shoreline and many of the roads with small red bushes. Virginia Creeper winds branches of both green and even brown, dead trees with scarlet.

"But, watch out for the red cover," our guide cautions us. "Poison ivy also decorates trees with red vines of three leaf clusters, while Virginia Creeper has 5 leaves."

As a writer, blogger, Christian, and all around curious individual, I look for a lesson in everything.

Trees are in many stages of turning colors. Some were totally yellow or orange with no green left. Some were half and half, or covered with three or four colors. Many trees retained their luscious greenery with the exception of one branch of orange, or red. 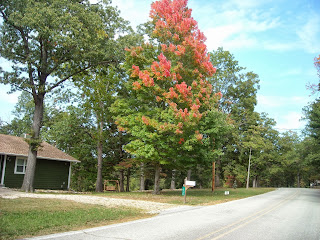 How like that we are in our Christian walk. Many of us are well into the process. Our minds and hearts turn naturally to God in most circumstances. Some of us call on God as the last resort. New Christians may ask Jesus to come into their hearts and start their Christian walk, while still clinging mostly to their old life out of habit.

Do we more mature Christians offer understanding, guidance, and a little patience to those who've only started to travel the path?
Posted by Unknown at 7:00 AM No comments: Links to this post

It Only Took 5 Years?

Learning has come full circle for me. I guess I'm slow, but, as the cliché goes, I'm sure.

Five years ago, I wrote a manuscript with this tagline:


He’s compelled to control her.


But only God has the power to provide

At the ACFW conference in 2008, I pitched this story to an agent and a publisher. Their responses were helpful, but the takeaway was that it wasn't ready for prime time.

I pitched it as an inspirational romance.

"To overcome her compulsive overeating and prove she isn't insane like her dad."

"We only publish romance."
PROBLEM NO. 2 - wrong publisher

NOW, I'M WISER.
I pitch it to the agent.

"What's the length?" he asked.

"Too short for women's fiction."
PROBLEMS NO. 3 - wrong length

The agent read my ten pages, and gave good feedback. I'll always be grateful for that.
He said, "Either, change the goal to hero and heroine finding love and publish it as a romance, or add 20,000 more words, and keep the same goal."

I prayed and made a decision.

Going through the entire work another several times, I added more drama, fleshed out scenes better, and took scenes from flashbacks to active time. Much better. Then I deleted unnecessary words. I was left with:
66, 000 words

In my inexperience, to add 14,000 more words, I needed another whole subplot, so I gave a fourth character three POV chapters. Now, I had it.
a little over 80,000 words

I pitched it several times after that without success, so I laid it aside.

Thanks to five years of online courses, reading books, going to ACFW Conference, Blue Ridge Mountain Christian Conference, and OWFI conference, I stored up a wealth of writing helps. During this period, I wrote, and wrote, and wrote some more. I read many books in my slow-reader style. In September, 2013, I attended the Immersion with Margie Lawson which improved my skill at putting the reader into the story and revving up the emotional impact.

I rewrote all fifty chapters. By the time I finished, the manuscript was 96,000 words.

PROBLEM NO. 3 repeated - wrong length
Only this time, it's too long.

I prayed and made a decision.

With my five years of studying, now I realize that I need to delete the extra POV chapters for the secondary character, and rewrite what happens in the hero's POV.

SOLUTION TO ALL PROBLEMS - deepen the emotion in your story
Posted by Unknown at 7:00 AM 6 comments: Links to this post

GEYSERS (and what they teach me)

Are you tired of hearing about my trip to Yellowstone National Park this summer? That sight was beautiful, awe-inspiring, and taught me many lessons. We spent 4 days viewing the park. By that time, we were geysered out. No, for you grammar gals, that's not a real word, but that was how we felt.
﻿
﻿Much of Yellowstone sits within the confines of an ancient exploded crater from volcanic eruption.

The four basic types of thermal features present in the park are geysers, hot springs, fumaroles, and mudpots.


Ten thousand thermal features are within the park, more than anywhere in the world. Only four other places have any of these; New Zealand, Indonesia, Siberia, and Chile.


Steam vents (of all kinds)  are cracks in the surface of the ground through which pressurized steam from below escapes to the surface, oftentimes with a hissing sound.


Some give a strong smell of sulphur.  Charles's nose wrinkled at this. Since I have little sense of smell, this didn't bother me.

One thing that surprised me was that there are five or more geysers that erupt steam at regular, documented times. One of those is the crown geyser. We snapped this photo when the eruption was just beginning. It can be counted on about every 90 minutes 24 hours a day, 7 days a week. Isn't God's world phenomenal?


The geyser walk scared the daylights out of me. Near Old Faithful where can be found a huge concentration of geysers and mudpots, we strolled a wood-plank broad-walk across miles of geysers. Some periodic, some constant eruptions bubbled on either side. There are no handrails. My overactive imagination built up worries about what happens if you trip and fall in those geysers. Most of them are in excess of 250 degrees Fahrenheit. Scary indeed. Praise God, we didn't fall.

Mammoth Hot springs is the home of most of the hot springs. They come in layers and look like white snow. Totally different, but equally interesting to visit. Though we strolled another walkway, the fear wasn't as real because there's no bubbling. 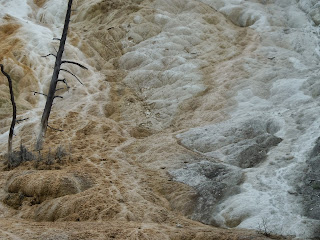 Of course, my pictures of geysers in Yellowstone Park wouldn't be complete without the most famous one, Old Faithful. This one erupts ever 40-90 minutes and attracts visitors from all over the world. We viewed the eruption twice. Awesome! 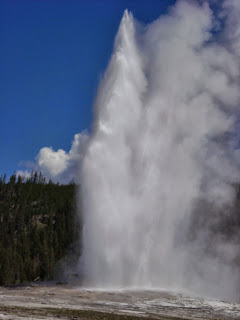 
Now, for the lesson I learned in touring geysers and other thermal features?

Hell is real.
Hell is at the center of the earth.
God is far more powerful than I can imagine or begin to envision

I welcome corrections, suggestions, or observations from my viewers. Have you traveled to Yellowstone? What was your take-away? Did you learn anything from my simple notes?
Posted by Unknown at 11:38 AM 1 comment: Links to this post