I'm a slow reader which means it takes a good book for me to keep plodding to the finish line. A week ago, I finished Laurie Alice Eakes' newest release Choices of the Heart.. 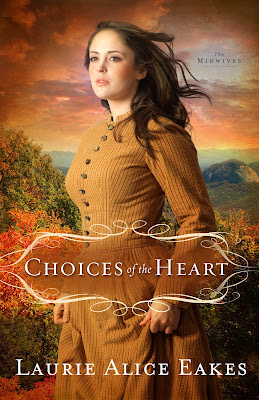 This historical romance takes place in the Appalachian Mountains, 1842. Laurie gives a unique perspective of how a family feud can touch even Christian families. I fell in love with the heroine in the first chapter when I sensed she maintained a strong moral compass despite unspeakable pain. Not as expected in an illiterate mountain man, the hero proves to be a leader in actions as well as words. The reader aches for this couple swooped up in family loyalties and a fierce code of ethics. The characters are strong, the description is vivid, and the conflict I found believeable. Along the way, I learned much about the career of being a midwife. I rate the book 5 stars for a tumultous roller-coaster ride of emotions and for sheer enjoyment.

I promised another author interview today to help viewers find new books for the new year. Since I recently finished this book, I'm excited to welcome Laurie Alice Eakes. I met Laurie at the ACFW conference in Dallas in 2007, have followed her career since then, and read several of her books. I can highly recommend her writing. 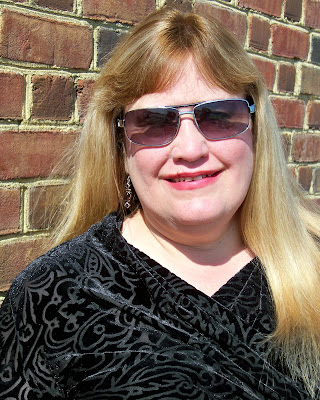 Laurie, welcome to Writing With Hope.
Tell us something about yourself.

To say I live a vagabond life is an understatement. Right now, my husband’s career path has brought us to Texas, and we consider either Chicago or Virginia home, depending on which one of us is asked. So my writing career has been a good thing, as I can write anywhere and have—from the backseat of an SUV on a cross-country trip, to a hotel suite, to a living room without any furniture. Right now I’m writing in a living room full of furniture because my desk is still loaded down with piles of books.

When not moving or writing, I love watching movies, reading all kinds of books, and exploring new places.

Tells us a little of your writing journal.

The abbreviated version is that I wanted to be a writer for a long time, but didn’t get serious until I completed my master’s degree in writing in 2003. Two years later, I sold my first book, which won the National Readers Choice Award for Best Regency. After a couple of hiatuses in sales, I ended up selling eleven books and two novellas in thirteen months. To date, I have sold two books to Avalon, now owned by Amazon’s Montlake, four to Barbour Heartsong, two to harlequin Heartsong, six to Baker Revell, and three to Zondervan, along with two novellas to Barbour for anthologies, and another novella in an anthology for Baker/Revell. Choices of the heart is my twelfth book.

Have you ever felt like giving up? How do you press through this?

Only about a hundred times. In 2008, when I had sold nothing in twenty months, I prayed for God to give me another calling. He didn’t—he gave me more sales. So when I get discouraged, I simply remember that each contract is a gift from the Lord, and when He wants me to stop, I’ll cease receiving contracts.

Where did you get the idea for this book? Tell us about it.

When writing the proposal for The Midwives series, I wanted a theme going—mist, which is air, sea, and then land. That land I wanted to be the Virginia mountains, one of my favorite places in the world, and thought the daughter of the hero and heroine of the first book was appropriate, so started thinking up reasons why a young woman raised in a loving family would travel nearly 400 miles away from that family—to protect her family, of course. Why? Because of some kind of a scandal that will follow her, as this is a story about how we cannot outrun our past or ourselves. Esther Cherrett has a gift and a calling, and God has plans for her she can only try to reject. When she thinks she is safe, she finds herself in the middle of a family feud courted by two young men on opposing sides of the conflict. She can either be the peacemaker, or the cause of renewing the violence.

How do you feel this book will encourage people in their walk with Christ, or did you have something in mind like this when you wrote it?

I always want others to feel encouraged in their walk with Christ, or else find a walk in Christ. This story, like the others in this series, is about self-forgiveness. We learn a great deal about forgiving others, and I can honestly say I have only ever heard one sermon preached on forgiving ourselves, yet a lack of self-forgiveness is spiritually and emotionally destructive.

Choices of the Heart is the third book in The Midwives series, which begins with Lady in the Mist, the story of Tabitha and Dominick, the latter a midwife longing for her own children, and Dominick, who was forced to choose between becoming an indentured servant, or exile on a West Indies plantation. Esther’s parents. Heart’s Safe Passage is Phoebe and Rafe’s story. Phoebe, one of Tabitha’s apprentices, goes to sea with her pregnant sister-in-law to rescue the latter’s husband from an English prison during the War of 1812. Besides this series, I am, apparently, getting known as a Regency author.

Oh, wow, makes everyone want to read all three. What's a little known fact about you?

Alrighty, then. I can sure understand the need to protect privacy. Sometimes, author's lives are an open book online, which comes to my next question. Where can your readers find you?

I am on Facebook under my full name, on Twitter under Laurie A Eakes, and my web site http://www.lauriealiceeakes.com

I also have a blog http://www.lauriealiceeakes.com/blog and am running a great contest right now, and am part of a group blog focused on Christian Regency romances
http://www.regencyreflections.com


There you have it. Go now and sign up for Laurie's contest and purchase Choices of Heart now.

(I will say that Revell sent me a complimentary copy of Choices of the Heart Other books by Laurie, I have gladly purchased.

Leave a comment to let us know what you think about the book, or Laurie's writing in general.

Watch my blog next Saturday for the next author interview with Sharon Shrock. God bless and HAPPY NEW YEAR!
Posted by Unknown at 9:00 AM

Laurie Alice is a talented writer. I've enjoyed several of her books but haven't gotten read this series yet. It sounds wonderful


Since my ancestors come from Virginia, I think I'd enjoy this book. Thanks for letting us know about it.

Yes, Vickie & Sue, you really need to read her midwife series. She said it was something kind of different for her. Of course, she made her name with Regencies, but she nailed this period.

I read the first book in this series and it is fantastic. The characters were well developed and I loved the air of mystery. I can't wait to read the other two books.

Thanks for your comment, Debby. I didn't read the 1st 2. Now I've got to go backwards, but I know the 3rd is fantastic.